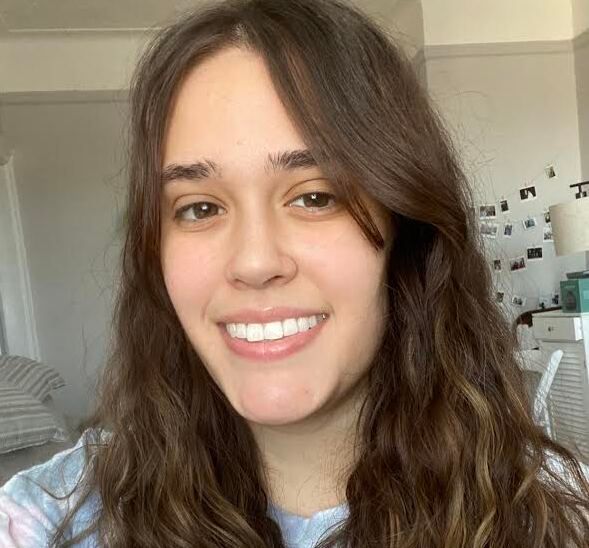 This week we’d like to put the spotlight on Annette de Armas, the brain behind the popular Instagram page, theburntoutbrain. Her unique illustrations and relatable content has garnered over 62,000 followers in less than two years. Combining her artistic talents and personal experience, Annette has created a go-to page for mental health advocacy, awareness, and support.

Can you tell me a little bit more about you? Who is the person behind theburntoutbrain?

So whenever I introduce myself, I always say I’m the brain behind theburntoutbrain, because on social media I think people tend to forget that there’s a human behind the content that they see. I’m 24, I was born and raised in Miami, and I moved to Brooklyn, New York last year in May. I was in a long distance relationship for, at the time, six and a half years, so we broke the distance. She has always lived here in Brooklyn, so I was like, I need to be the one to move. We have a cat named Rosie, and I just live my life every day dedicated to mental health advocacy, whether it’s through my shop, through different opportunities, being able to talk to people, or through my art.

And what led you to create theburntoutbrain?

Almost two years ago, in August 2019, I was trying to figure out a new way to deal with my struggles at the time. I was going through a little bit of a rough patch. I was already following, at the time, a bunch of artists that would post really relatable stuff. It’s really weird to say that they’re all my friends now, but at the time I would admire them and I thought to myself, if they’re able to beautifully put down their emotions on digital or through art, I think I could do the same because I’ve always been art-inclined. So I went out, bought an iPad, and I just started. Then somehow, two years later, there’s 62,000 people following me and care about what I have to say. It’s really cool.

It is really cool. You mentioned that you were dealing with your own struggles and that’s what led you to create theburntoutbrain, do you feel comfortable elaborating about that?

Sure. I have been struggling with my mental health since I was 15. Mainly the reason why it happened, or things kind of went south, because I’m gay and I had a really hard time accepting that. I thought, back in my 15-year-old brain, I was never going to be able to love anybody. My family was never going to accept me. I was never going to be loved and I didn’t deserve to. So after this revelation, I quickly developed depression, and then anxiety, and I’ve been dealing with those for basically 10 years now. I started getting help, like actual professional help, when I was 20. So for five years, I was going untreated. I’ve been with the same therapist for almost four years now. Therapy has made a huge difference in my mental health journey.

That’s amazing, thank you for sharing. Is theburntoutbrain a full-time job, or are you up to other things as well?

So I actually quit my full-time job in March to do this full-time.

Thank you! It was a really bad job, and I was there for two and a half years. It made my mental health tank to the point where if I didn’t quit I was going to end up at a hospital. I had already been saving money because I knew the time was going to come for me to quit. So I had a good amount of money saved and said “You know what? I’m going to do this because I can’t put my happiness over anything anymore.” My mental health is the most important. So this is all I do. I live and breathe theburntoutbrain.

How did you come up with the name for theburntoutbrain?

I like to say that I have just been in a perpetual state of burnout since I was 16. Because I’ve always been really accelerated academically I started college when I was 16 and I haven’t had a real vacation since then. I haven’t had a break. So I have been burnt out since then, for a long time.

That’s a long time, that’s almost a decade! Everybody needs a break, so definitely take a break, if you can. Do people DM you and say “I’m dealing with X and looking at your feed has really helped me”? What has been the most memorable feedback you’ve received so far?

When I started my account in August 2019, things really didn’t start picking up until December 2019. Since then, I have been receiving messages and responses from people almost daily thanking me for what I do. My response is always the same, with every single person every single time that it happens, it feels like my heart is going to pop. I think a lot of it has to do with imposter syndrome. Sometimes I’m just like, “I don’t know how I did that.” Because all I do is draw what I feel, and I don’t know how I can impact people. But I do know, but it’s just really strange, like what goes on inside of me. But it’s mostly just a lot of gratitude, and it makes me feel like this was what I was put on this earth to do. I spent a lot of my time in my younger years being so lost and confused about what I wanted to be. I had no passion because I was severely depressed, and now I found it, and every single time I get a message like that it’s confirmed to me that this is what I was meant to do.

That must be an amazing feeling, to wake up every day to messages from people expressing their gratitude for you. You mentioned that it was sort of like a slow increase until December, and now you have over 62,000 followers, which is a huge amount to have in such a short amount of time. What do you think was the difference-maker?

I don’t know. Honestly, I have no idea. I know that what helped a lot was being shared by bigger artists, which was happening quite frequently. I think one of them just got really popular, and since then the algorithm picked up my account and kept showing it to people. At the time, when things started picking up significantly, I was on vacation in Orlando, even though it wasn’t really a vacation since my boss was still messaging me, and I was in my hotel room, watching Harry Potter, drawing on my iPad, and all of a sudden, my post had gotten 700 likes, and that’s never happened before. I realized this is the life, this is what I want. Maybe that energy kind of helped too. I don’t know.

That’s awesome. Also, watching Harry Potter in a hotel room in Orlando sounds like heaven right now. But I want to segue a bit because I also know that you’re the co-host of the WeMind podcast. You’re basically the busiest 24-year-old in Brooklyn. Can you tell me a little bit about the podcast?

It’s a little bit of a passion project between me and my cousin, Janet. Both of us struggle with our mental health. We both have a story to tell and feel like people’s voices are most important in the de-stigmatization of mental health. We talk all of the time on FaceTime for hours, and we said, let’s just talk on a podcast. The thing is, it came to a halt before we even started. Back in March, we were both in really bad places, and that’s when we filmed our first episode. We never posted it. But we spoke this week and talked about re-recording because we were both in very different places than we are now and I think it’s going to be even better. We’re both clear so we can keep rolling out what we intended to do. So the intention is to bring people on, tell their stories and amplify their voices because that’s what’s most important.

That sounds great, and who are you bringing on the show?

So right now we’re inviting anybody, anybody who feels like they have a story to tell with their mental health, we want them on. We’ve been compiling a list because even though we haven’t started we still get DMs from people with these amazing stories that want to come and talk. That’s who we want, and eventually, we would love to have a lot of big creators come and talk.

I can’t wait to listen to it. You mentioned you’ve been dealing with depression and anxiety since you were 15. What would be your best piece of advice to someone who is experiencing something similar?

I feel like this answer changed within 24 hours. I would usually say, make sure you take care of yourself, have a self-care routine, and things like that. But lately, I’ve been realizing that I think we, as people who struggle with our mental health, have been placed with this burden of taking care of ourselves and making sure that we do everything under the sun before actually getting help. Because accessibility is just a big issue when it comes to getting treatment. So I would say try as best as you can to find any sort of resource where you can go get professional help. But if that’s not the case, if you can’t, then try to see what makes you feel better, try to set up a self-care routine. But it’s important that we try to advocate for our lawmakers and other higher-ups to try to make things more accessible for us because we shouldn’t have to rely on bubble baths, journaling, and things like that to get in a better mental health space. It can help a little bit, but not entirely.

That’s really good advice. The inaccessibility of therapy is actually one of the reasons Circles was created, so I totally understand where you’re coming from. Last question: you’ve come a long way with theburntoutbrain, from August 2019 to almost August 2021. Where do you see it going in another year?

Well, I have a lot of goals, I have big, big dreams. I think that’s what happens with a lot of creatives like myself, we want to do everything under the sun. I have a small business, and right now it is my main source of income, but it’s not enough. I’m hoping that, as time goes by, I keep creating more products, get more visibility, and then different opportunities. I recently got an email where a messaging app wants to license my artwork, so I just hope that more of these opportunities keep coming up. Then I can just help people, that’s my whole why. I want to be the person that I needed when I was 15 for people. I’m not a professional, that’s a disclaimer that I think is very important. Instagram is not a substitute for therapy. The artists that we see and the creators that we see are just people. Unless there’s “doctor” in the bio or name, we are not professionals. We’re just people putting stuff out there that we feel would relate to everyone else. I just want to keep making people feel seen, and hopefully, I don’t know, maybe one day do a TED talk. That’s the goal.

You should definitely do a TED talk. Thank you so much for taking the time to speak to us, it’s been such a pleasure.